Welcome to my blog. The main focus of this blog is to share my explorations into handmade goods, mostly of the needlework kind. My interests are varied and include reading fantasy and urban paranormal romance, cross stitching and keeping hamsters. I must inform you that all of the pics and text on this blog are copyright protected unless otherwise stated and are not to be used in any other written or pictorial form without written permission from me. I give credit to the creator of the chart or the publication that published them in the caption. If you feel I have infringed on a copyright, please contact me ASAP. Whew..OK, now on to the fun...Thank you and Welcome.

Stuff plus a few pics

Hello all, hope everyone has a very safe New Year celebration and that the new year is blessed with many wonderful things.

I want to start with a few pics so those that don't want to read my rant (below), won't have to. 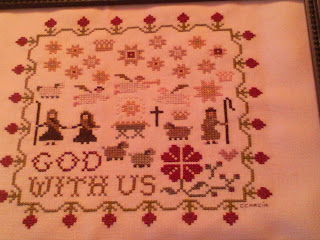 This was free stitch along by Plum Street Samplers. This was offered in nine parts. Am proud to say that I kept up with the parts and finished on time. I made quite a bit of substitutions as I am very committed to working from my stash. =  ) 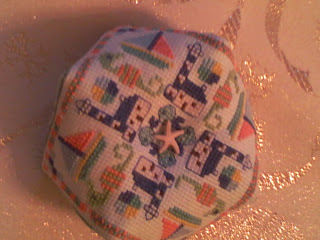 The above is the evil, stupid biscornu that some of you of heard me whine about. Despite it'apparent simplicity, I made many, many, many mistakes requiring just as much time frogging as I did stitching. Some projects are like this for me. I don't have the name of the designer for this one. I stitched it on light green 14 ct aida and substituted all of the colors. The center is a little star fish button from My Favorite Things available at Michaels. 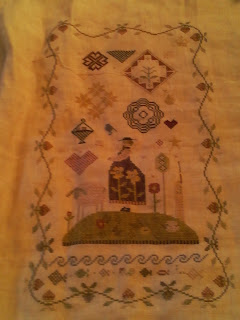 Above is my progress on Sheperd's Bush "Finch Song". This was fated to become a UFO but I buckled down and started stitchng on it again last week. Am glad I did as it is almost finished. There was not sufficient silks to finish, so I substituted with HDF and even some coton floss from WDW. Working with the silk threads in one strand was very difficult. The fine threads frayed and knotted. Someone suggested using Thread Heaven, duh! and I did and that helped remarkeably!

A few issues with this design was that the chart was done by hand, which made the symbols hard for me to see. Also, the designer leaves blanks in some of design and instructs you to fill them in, but when I am focusing on following a chart, I don't recall those types of things. The design should have been entirely filled in...after all, filling in the blanks would not have added more work for her but have spared all of us the hassle of going back to finish it properly. Another problem was that this came as a kit with none of the threads identified by color or manufactorer nor were they separated into groups. Some kits have similar colors separated into groups or they tell you the number of skeins so you can differentiate them, well, this kit did not. It had 5 different greans that were so similar I couldn't tell them apart. Turns out I used the wrong green on the hill as a result. All of the negatives with this kit will make it hard for me to purchase another. I have bought small kits from Sheperd's Bush such as for key fobs and whatnot but for big kits like this, if they don't separate out the colors and provide enough to finish, it just won't be worth the price or effort. 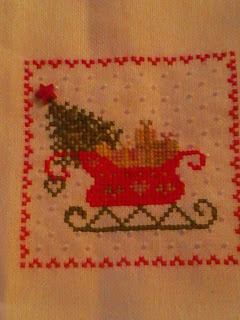 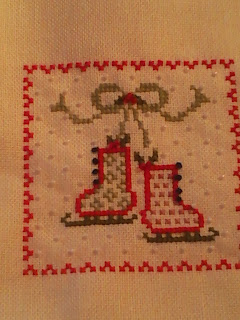 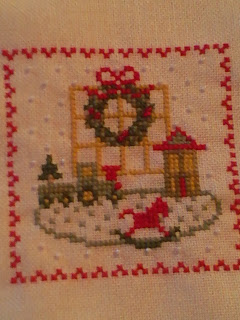 The top three are from JBW designs. Very simple and cute, almost nostalgic for me. I used threads and beads from my stash. Yay!

Well, this is it for the stitching up date! Hope everyone has had lot's of time to finish things and make some progress, as I have! Happy New Year All!!

Now for the non-stitching stuff ----I hope 2014 is better all around, but especially that those in authority start respecting those of us that put them there. I hope for many wonderful blessings for everyone. Here in the US, we could use a few blessings as a nation, and a people and also individually. My most earnest prayer is for Congress and the President of the US and his adminstration. Both appear to have lost sight of their purpose and what they symbolize. I pray for the Supreme Court, that they not disregard the principles and laws in the constitution in the name of political expediency. (Remember Animal Farm? I always thought it was about communism, but now I understand, it's about any government that forgets the people, including democratic republics.)  I pray for my neighbors and co-workers that face the unknown on a daily basis. I pray for hope for the young men of Dade County here in South Florida. Despite all the benefits and privileges available to them, purchased by others' unceasing work and sacrifice, they continue to kill and murder each other and many innocents, for nothing more than a few dollars. I pray for the policemen here as well, who have forgotten their purpose, too...that is, to serve and protect. Instead, they have no discipline and no accountability. Many have died at their hands that shouldn't have. I could go on and on, but won't, as it seems rather overwhelming. The thing that helps me is focusing on raising godly children and staying the course and not losing faith. I have come to the realization however, that I must leave this town.

Anyway, whatever you are facing, my prayer for you is that you overcome it, stay kind and decent, don't give in to despair and be a light onto the world. And if you can't be a light right now, that you  find someone to light you up, like a bonfire! God bless!

Christina
Posted by Christina G at 1:35 PM No comments: Links to this post